In 2013 Pictoplasma was invited by MOTI (Museum of the Image) in Breda, The Netherlands, to create a visual remix of the Spaces Invades arcade game, of which they store the original code as part of their permanent collection. As part of their Hotel Moti exhibition, Pictoplasma came up with a reduced Split-Flap display version of the iconic franchise, allowing artwork from Pictoplasma’s archives to randomly replace the approaching space ships in an installation of dysfunctional communication and ever-changing character patterns. 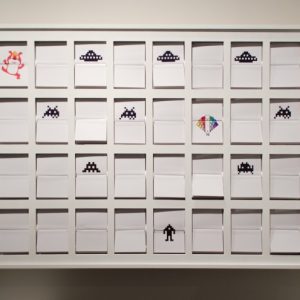